It seems a long time since December 2014 and waiting for my turn to talk at the SSAT Teachmeet in Manchester about an idea I had about launching the #teacher5aday hashtag. The original inspiration had come from a presentation I had co-delivered with Tania Harding at TLT14, as a last minute replacement for Mark Healey. 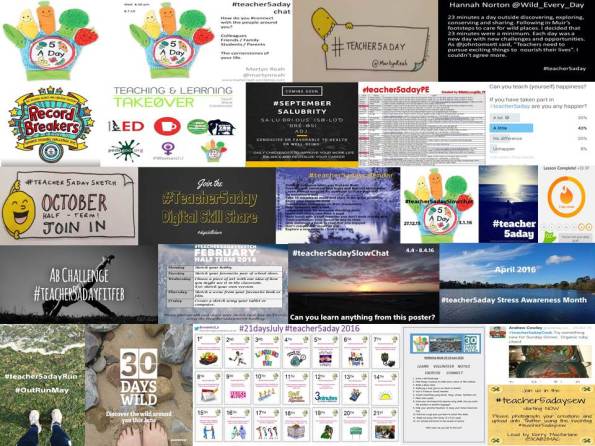 Mark’s presentation, which was based in part on the New Economics Foundation report the “Five Ways to Well-being” (2008) written by Sam Thompson, Jody Aked, Nic Marks and Corrina Cordoniof (http://www.fivewaystowellbeing.org/), had made quite an impression on me . Probably on reflection, it was one of the most inspirational things I had listened to in a career spanning two decades. It provided me with a positive way to continue the debate about teacher well-being and the positive impact it can have on student outcomes after I had experienced the most negative part of my career to date.

As time has gone by it seems like I am not the only one that had been inspired by Mark’s words http://audioboom.com/boos/2575736-teacher-well-being-stress .

Fast forward twenty months and #teacher5aday has developed quite considerably.

There have been a number of offshoots in a Damon and Debbie / Brookside style which have been led expertly by a number of amazing practitioners. This is the greatest strength of the community that has developed in my opinion. Teachers have found a way to help each other. People who work in the classroom and understand the daily pressures have shared their views, feelings and opinions and offered their unconditional support.

As September draws near it seems like a good time to reflect on what has happened this year and to think about what might happen next year. A trusted colleague asked me recently how many hashtags had developed since the original #teacher5aday idea was launched. This took me some time to think about and I’ve probably missed out a few but the list below is now quite extensive.

Ideas that run throughout the year (mostly prefixed with #teacher5aday)

Star of the week @MarieP_edu

SlowChat – a variety of contributors

The idea isn’t that everyone should do every aspect of the ideas listed above. I was taught the phrase FOMO (frightened of missing out) last term (by a younger colleague), not something that I had been aware, but something I now understand is a concern for others. Instead of thinking that everyone will do everything I hope that people choose to dip in and out of the ideas as and when it is important to them. What I do hope has happened is that there has been an awareness raising of the importance of teacher well-being. That everyone will consider their #teacher5aday every day and not just at weekends or holidays.

The original idea from the NEF report helped people write their original #teacher5aday pledges. Rather than suffering from FOMO I hope teachers choose to consider their #teacher5aday and #connect, #learn, #notice, #exercise and #volunteer when it is right for them.

If you would like to get started and think about how to improve your well-being this might help http://wp.me/p4VbxY-76 .

To get some ideas from other teachers working in the classroom day in day out take a look here http://wp.me/p4VbxY-dc .

All ideas are welcome so please get in touch if you would like to develop a monthly special or another idea related to #teacher5aday. I’m still practising my ongoing professional learning target of non defensive reactions to feedback.

2 thoughts on “the development of #teacher5aday”

This site uses Akismet to reduce spam. Learn how your comment data is processed.